Millions of Buffalo once roamed the Great Plains of North America and were integral to the ecosystem. In the late 1800s, they were almost completely annihilated. In 2016, after being absent for more than 130 years, the first Buffalo returned to the Wind River Indian Reservation in Wyoming. Led in an effort by Jason Baldes of the Eastern Shoshone Tribe — as well as the Northern Arapaho Tribe, the InterTribal Buffalo Council, and the National Wildlife Federation — conservation Buffalo are beginning to once again roam their ancestral lands. This website tells their story and paves the way for their future. 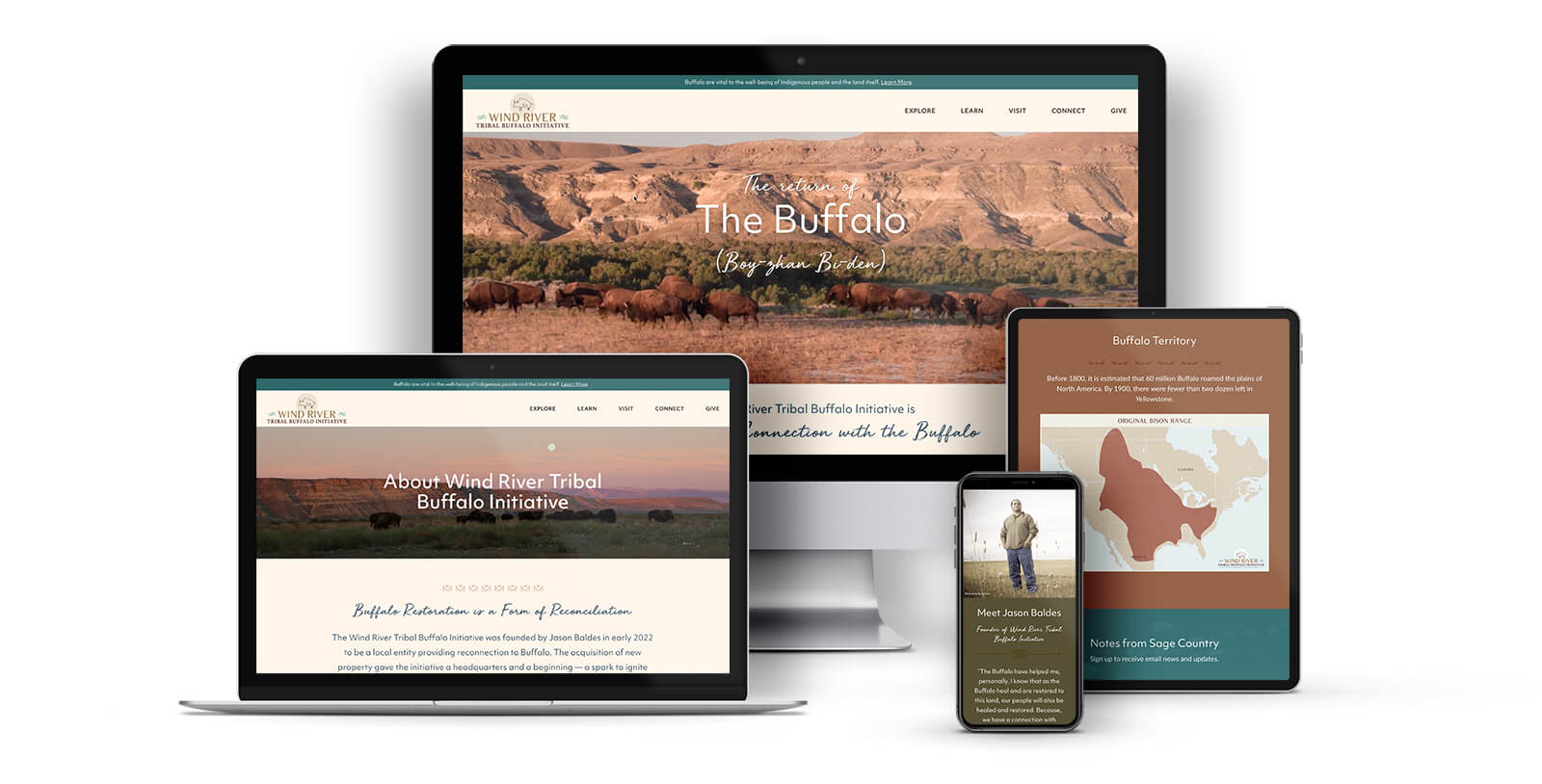 To set the stage, our Oregon-based Ruby Slipper team collaborated with Jason Baldes — a member of the Eastern Shoshone Tribe, manager of the Eastern Shoshone Buffalo Herd, and Executive Officer of the Wind River Tribal Buffalo Initiative. He has been spearheading the return of the Buffalo to Wind River for over 30 years. We also worked with Mark Headley, Board Secretary, who in his youth spent summers in Wyoming.

We relied heavily on Jason’s input as the site needed to exude Native American values, history, and reverence. It was imperative to balance education, history, and hope.

The story of the Buffalo genocide is one of the most extreme human-caused massacres in our history. But now, thanks to numerous Tribal Initiatives throughout the country, we are at a place of hope and renewal, with a promising future for conservation Buffalo ahead.

In regards to this project, truly our biggest challenge was that Jason is BUSY. He wears an unbelievable number of hats. Some meetings were delayed because he was out repairing fences, on Zoom calls with Senators discussing important legislation, or on the road teaching communities about the importance of Buffalo. So when the stars aligned and we got to meet, we counted ourselves grateful.

Our graphic designer Ashley created a powerful logo, one with deep meaning and intention. At the center is a petroglyph of a pregnant mother Buffalo — a beautiful tribute to the initiative’s mission of “land rematriation” and giving back to Mother Earth through restoring this keystone species.

Our web designer Dena worked with Jason to incorporate colors, fonts, and symbols that capture the landscape of Wind River. Golden hues of the plains, blue-green sagebrush, brick-colored petroglyph backdrops, and pine green accents. Along with stunning photos of Buffalo, everywhere.

Our copywriter Rachel worked closely with Jason to make sure the story was told with accuracy. And our programmer Fiew spent countless hours painstakingly making sure this masterpiece of a site works flawlessly from desktop to mobile.

This is the most important site Ruby Slipper has ever been a part of. We are now HUGE Buffalo champions — passionate about them flourishing in Wyoming and elsewhere in North America. This new site is visually stunning and features a video snippet from the talented Colin Ruggerio. An animated map shows how the histories and futures of Native Americans and Buffalo are integrally intertwined. The simple navigation invites visitors to Explore, Learn, Visit, Connect, and Give.

Our great hope is that this site will serve Jason to tell this story to the world. We hope donations flow in and that the Buffalo and Wind River Tribes thrive and flourish.