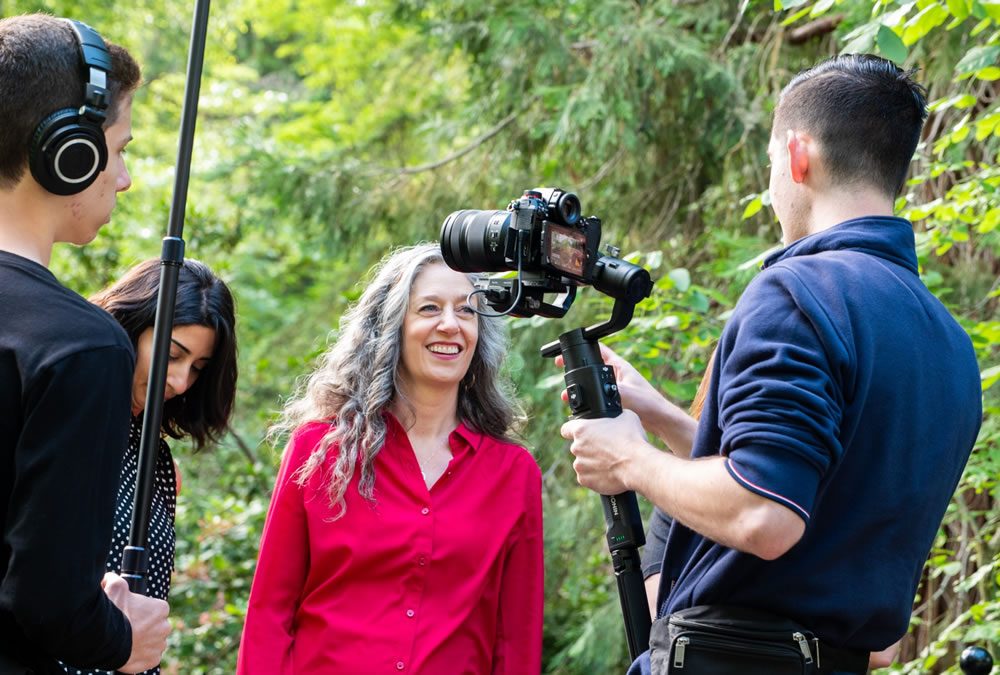 In early 2019, we hired Nickolas Alexander to create a video about Ruby Slipper. WOW — massive undertaking! Here are the steps and what we learned about making a corporate video.

After interviewing Nickolas and really liking his style and methodology, we began in earnest. We kicked off by reviewing my goals, videos I admire, and then brainstormed.

Nickolas presented the script which included:

This document was essential to hash out the finer points. We revised it about 8 times.

Scheduling 7 people is HARD! We had the perfect day and it RAINED. What do ya do? We rescheduled.

We also needed the perfect combination of locations. My office is lovely but not quite right for filming. I toured multiple spots in Ashland — coffee shops, restaurants, hotel lobbies, rental spaces, friends places of work. We SUPER lucked out because Jefferson Public Radio, whom Ruby Slipper supports, allowed us to film in their gorgeous new conference room. We are extremely grateful to JPR! Nickolas also did in-depth research and found specific locations within Lithia park.

First, I went to the studio to record the voice overs. I spoke into a microphone multiple times and practiced vocal emoting. Not my everyday routine!

Then came the day of the shoot. We had a tight schedule from 7am – 12pm. It involved all of us meeting first at Lithia Park and filming in 4 different spots, then transitioning to the SOU campus for the JPR conference scenes with Ruby Slipper and our wonderful client, Shawn Flot of Moving Into Harmony.

Huge gratitude to my teammates Ashley, our graphic designer, and Dena, our web designer, for their willingness to be in the spotlight. It was wonderful to be in the capable hands of Nickolas and his crew, which included his wife Eveling, a talented videographer, and Jorge, their marketing assistant.

After Nickolas and his team finished filming, they had the hard work of editing, adding music and voice overs, fine-tuning motion graphics and adding lower-third titles.

I received the link to view the first take and overall, I loved it! Their team did a magnificent job. I did have some requests, which they kindly obliged. To stay on brand, we revised how our client logos were presented and how the lower-third titles were designed. The funniest part (to me) was that the start of the music sounded exactly like the soundtrack from Friday the 13th horror film. So Nickolas kindly cut that, as this isn’t a slasher! 😀

Once the edits were wrapped up, I published the video on the Ruby Slipper YouTube channel, our social media, and added to my website. Only 5 minutes passed before clients (old and new) contacted me saying how much they appreciated the video!

And now I know that making a video is a BIG DEAL!

Creating a corporate video parallels web design in that when creating something from scratch, a TON of work is involved. The end product makes it look effortless yet so much thought goes into each and every component.

And here is the final product! Thank you SO MUCH Nickolas Alexander Films!

Every day, we are immersed in the fast-paced world of web design. Here, we share our insights with you!